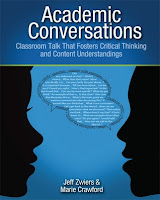 Discussion is indeed an essential part of a university education. But not, alas, of K–12 education. As the Learning 24/7 study makes clear, there was evidence of “academic dialog and discussion” in only 0.5 percent of the 1,500 classes they observed (Learning 24/7, 2005). Despite the importance of academic dialog, most students don't engage in it until college or later— Results Now  - Mike Schmoker – Chapter 6 Authentic Literacy 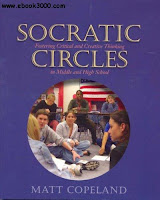 At D.C. Everest we had always tried to incorporate discussion into the classroom, but it was not until around 2006 that we discovered Socratic dialog.  After researching what Socratic discussions were we began to implement them via the use of Socratic Circles.  I read Socratic Circles by Matt Copeland and found his dual circles to be effective in my American History Seminar class.  Other teachers also began using Socratic circles and the department came up with some effective observation forms that students could use to gather data on their peers during discussion.  The most effective discussion model turned out to be the 4 by 1 which put the students in groups of 5 with one observer and 4 discussants.  With each agenda item the observer form would rotate.  Students were more apt to engage in discussion in the small groups.

Interestingly enough, Zwiers uses symbols and gestures (posts them in the room) to get students to use the conversation skills automatically. I plan to integrate the teaching of these five skills into my discussion unit along with the skills that I have previously taught.

Posted by Paul Aleckson at 9:50 PM