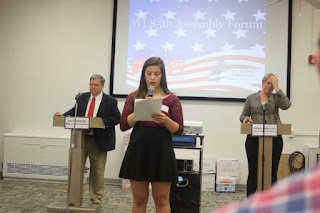 In 2016-17 Jeff Bergstrom piloted his Action Civics authentic learning course in one of his American Institutions classes.  Rather than traditional U.S. government lessons, Mr. Bergstrom implemented several hands on community based activities that allowed students to learn about their government first hand.  This project based pilot was so successful that he now has two Action Civics classes in 2017-18.  Following are just a few of the authentic experiences students engaged in.